The winter gales were a problem to us at Dog Kennel Wood. One of the large conifers had a split trunk and split completely. One half fell safely towards our pond but in the January winds , the other half toppled towards our classroom and clipped the roof which Nigel has patched up but it may need closer inspection. The tree also damaged the boundary wall.

While the days were short KCV was busy in Serpentine Woods.  It’s been hard work scraping mud from the paths that meander under the trees but it made a big difference.

Brambles were cut back one metre from the tracks. In some places the bramble stalks are like broomsticks . Those were cut and taken back to Dog kennel Wood to be burnt.

The footpath leading from the golf-course road down to Undercliff Road was cleared of undergrowth and especially cotoneaster. The path itself was roughened as it had become very slippery.

Attention turned to the drystone walls of the Tram. Several gaps had appeared  and been left unfilled for more than twelve months. KCV had two days of walling refresher course from expert Jack Ellerby.

KCV had a busy summer as always. This year our main battle against the Himalayan Balsam was waged in Lorton on behalf of  private landowners and also the Morecambe Bay Partnership. The group was pleased to return to Meathop Woods and continue work begun a year or so back. Lets hope that next year HB will have been eradicated from the wood itself but there’s masses more on the low lying dykes that we couldn’t touch. 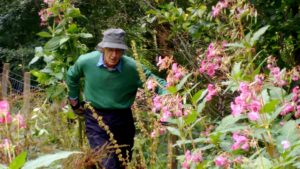 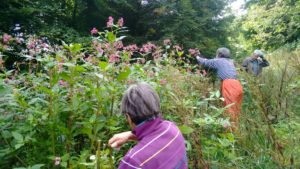 The Summer of 2017 has also been a very good one for Ragwort. 5 Large builders bags were pulled in just a morning at Holme Stinted Pasture on behalf of the commoners who graze this SSSI with Belted Galloways. 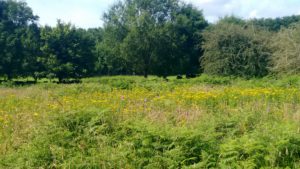 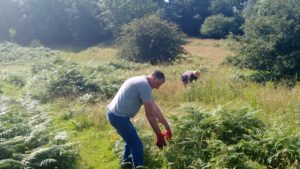 As with last year we collected nearly ripe thistle heads  at High Hampsfield Farm. Whilst thistles are a good for butterflies , if too much thistle down seed  sets  then the pasture is diminished and will need to be treated with herbicide.