The Kendal Conservation Volunteers (KCV) are pleased to announce that George Whitwell’s Victorian Fern Garden has won a Gold Award in the 2018 Kendal In Bloom competition.

Over recent months KCV members have worked to recreate George’s ‘Victorian Fern Garden’ adjacent to Serpentine Cottage next to the entrance to Serpentine Woods on Queens Road, in Kendal.

George Whitwell was a founder member and Hon Secretary of the Northern British Pteridological Society that held its inaugural meeting on 23 September 1891 in Kendal. He resided at Serpentine Cottage for fifty years from 1875 to 1924 during which time he collected and cultivated ferns in his garden.

Whitwell was an active BPS member who developed his passion and knowledge and became a recognised authority of Lakeland ferns with several articles published in the British Fern Gazette.

Recent research into the history of Serpentine Woods revealed the Whitwell connection through his role as Superintendent of the Serpentine Walks and his passion for Lakeland ferns. Several Victorian artefacts discovered in Serpentine Woods support the assumption that Whitwell cultivated his fern garden at Serpentine Cottage. He was a renowned fern collector but following his death in 1924 a large proportion of his fern collection was moved to Scotland.

Over the intervening years Whitwell’s fern garden became neglected reverting to a dense carpet of ivy, brambles and tree saplings. In spring 2018 the Kendal Conservation Volunteers began a regeneration project to clear the area to develop a fern garden for local residents and visitors to enjoy.

The encroaching vegetation was cleared from the site, rock terrace and retaining walls were revealed and rebuilt, and beds and paths constructed using stone donated by local residents. During the renovation work the remains of a stone building, possibly Whitwell’s tool shed, were revealed. On completion of the hard landscaping a range of ferns have been planted in the garden including several varieties associated with Whitwell.

The success of the project relied on generous donations of materials and ferns from Fellside residents and many hours of labour from the KCV volunteers. The project benefitted from expert advice and fern donations from several BPS members and donations from national fern collections at Sizergh Castle and Holehird Gardens.

The garden impressed the Kendal In Bloom judges who announced a Gold Award for the project at the 2018 Awards Ceremony. Kendal Town Council then asked KCV to grow ferns and other native plants in three Town Centre planters to illustrate other aspects of Kendal’s heritage and changing landscape. This is now known as Kendal’s Legendary Landscape Trail. 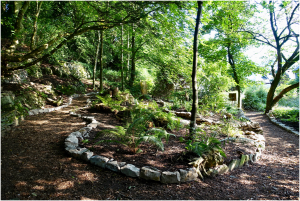