We have recently start 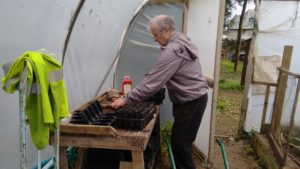 ed growing wild flowers at Dog Kennel Wood. The flowers are grown from seed, and transplanted as small “plug” plants.

This is a science initiative along the course of the canal in Kendal working with five schools and community groups. KCV were asked to grow five types of wild flower plugs for the project. (Other types of flowers were also planted, but bought elsewhere).

The project requires 10 specific species to be planted , ones known to be excellent pollinators. KCV supplied 2800 plants in September 2017, and helped plant them with parties of children from various local schools.

KCV was asked by CWT to grow wild flowers for landowners and anyone who needs plants to enhance the biodiversity of meadows  but also woodland too.

CWT supplied seed for Meadow Cranesbill, Woodland Cranesbill, Great Burnet and Knapweed. These were sown last autumn and the germination rate  has been good. Great Burnet appears to be the most reluctant seed d to burst into life. The seeds are germinated in the poly tunnel, and then pricked out into root trainers in the spring.

We may have plants to spare , do you know somewhere that could benefit from a swathe of wild flowers?